Below is Owenshire’s complete discography, both real and imagined. You see, like all things Owenshire, this discography is somewhat unconventional and requires a bit more explanation. Do all of these songs exist? Of course. Are they all recorded in super HD quality ready for you to download? Nope.

As the band biography states, only the first two albums were professionally (and I use that word very

loosely) recorded in a studio. The rest of these fully sequenced albums are (mostly and temporarily) comprised of live band recordings and home demos.

But here’s the good news: I’m re-recording these demos into fully fledged glorious hi-fi tunes one song at a time. Poke around in all the usual places to see where I’m currently at in this taxing life goal. Or, for starters, click on the album titles below to preview, download for free, or purchase songs/albums through Owenshire’s Bandcamp page. Of course, subscribing to Owenshire’s social media sites is a good idea too.

Finally, please note that the chronology is all fucked up given I’ve chosen to (mostly) group songs together based on when written, as opposed to when released for actual streaming or purchase. In short, I’m a firm believer in “songs needing a home” and these albums house these songs no matter their actual public release date. 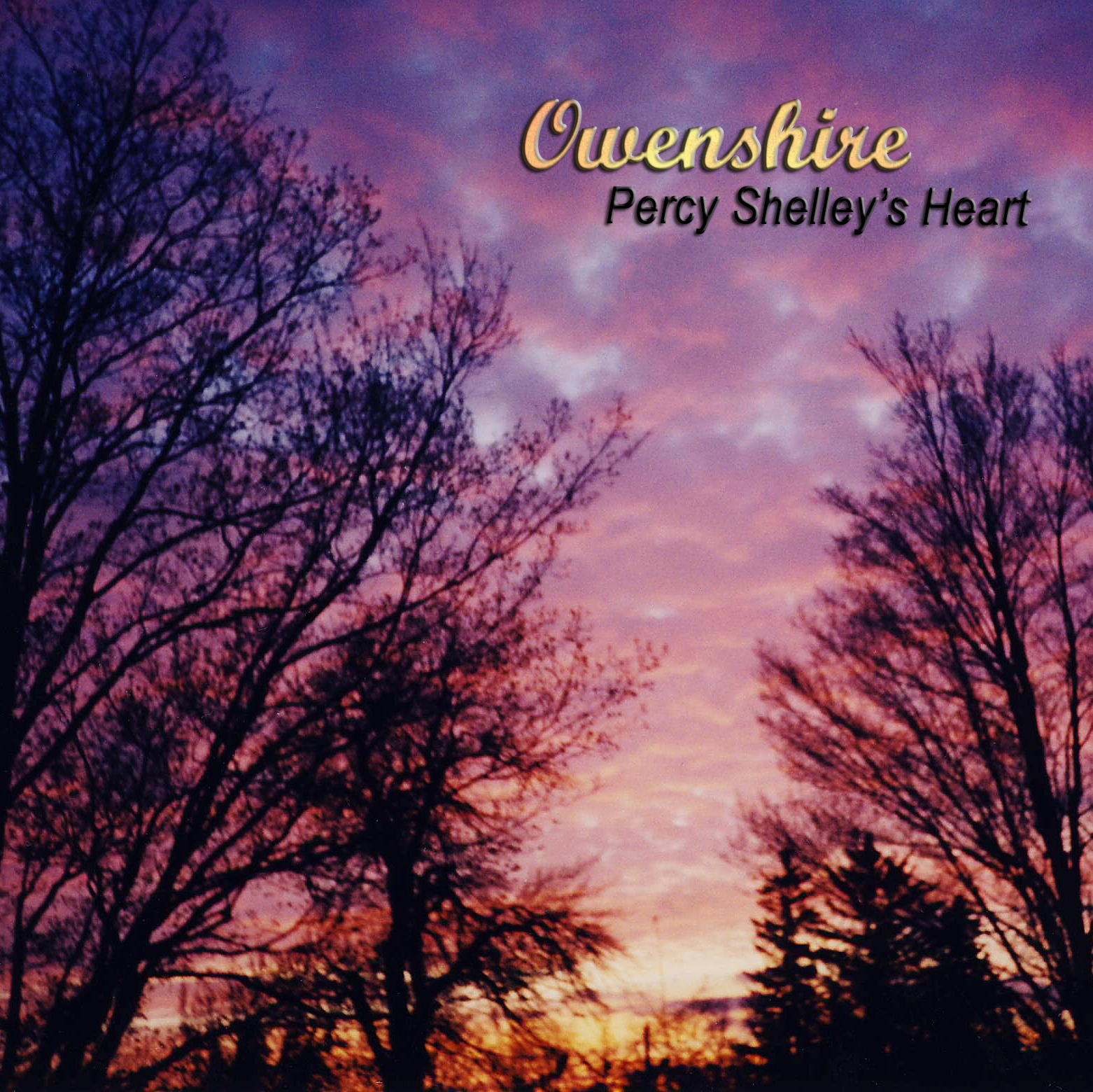 Tracklist: From Bermuda/ Learning Curve/ Oscar Wilde/ What I Did On My Summer Vacation/ Mountain/ Ghostship/ Nothing Is Left/ Goldmine/ Polite/ Love Is Dead/ Serenade/ Jim Zuccarro: This Is Your Life

Summary:  Owenshire’s enthusiastic and naïve debut. Think: summer, sunsets, and lost loves. I still love these songs but find most too tame for my tastes.  I plan to correct this some day. All songs written by R. Muhlbock save for track 11. 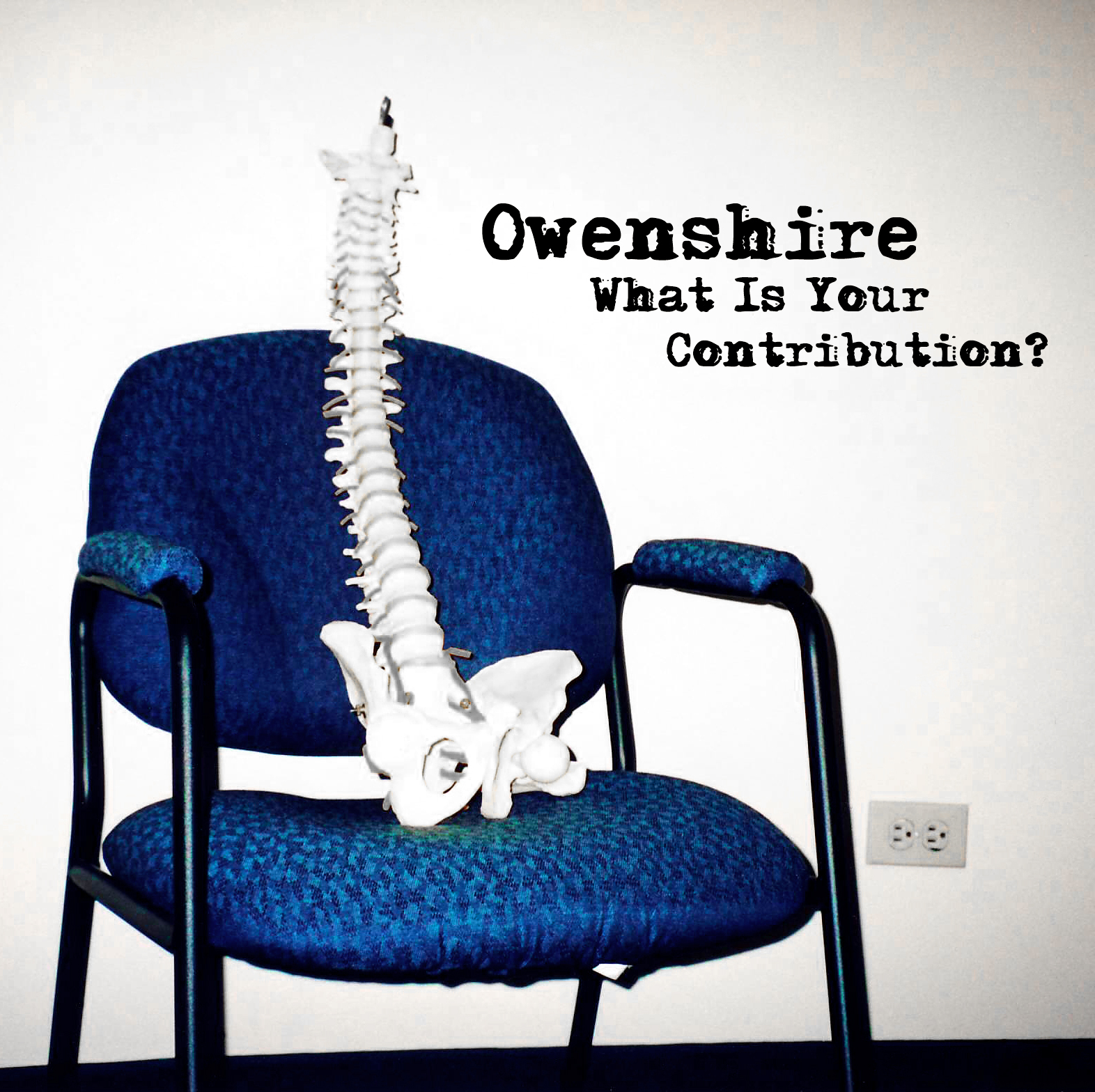 Summary: The more ‘abrasive’ second album, but not really. Think winter, broken windows, and lost childhoods. Still too tame. All songs written by R. Muhlbock save for tracks 6 and 11. Tracklist: [Disc One]: Touch/ Clepsydra/ Savage Eyeball/ Chlorine/ Lemme/ The General Consensus/ As I Walked Out One Evening/ Allowed/ A Reminder/ In the Fall/ Condone Suicide/ Monotone/ Question/ Mother

[Disc Two]: Runway/ Pocketwatch/ Beauty Used As Weapon/ Last-Name First/ Keychain/ Waste/ The Tuba/ How To Cut Your Own Throat/ The Radiant Star/ The Happy Number/ 3 Mile Island/ Indoor Plumbing/ Our Children Are Weaklings/ I Went To Market

Summary: The self-indulgent third release double album. In hindsight, maybe better as a solo record, but we were determined to clean out the cupboards. Comprised almost equally of old Rob home demos, older Dan and Greg songs, and newer Rob compositions. If you need a metaphor, think carefully curated, yet tacky, home furnishings. Maybe too varied for its own good.  Oh well. All songs R. Muhlbock save for three. You guess which ones.

Summary: The proper title is “Passport/Mugshot: The Greg Album.” Fourth album, kind of. At this time Greg amassed a nice batch of demos we all loved; that is, until he got sick of them. Still, songs need a home, and I gave them one. All songs written by Greg Muhlbock save for Defeat. I wrote that one. 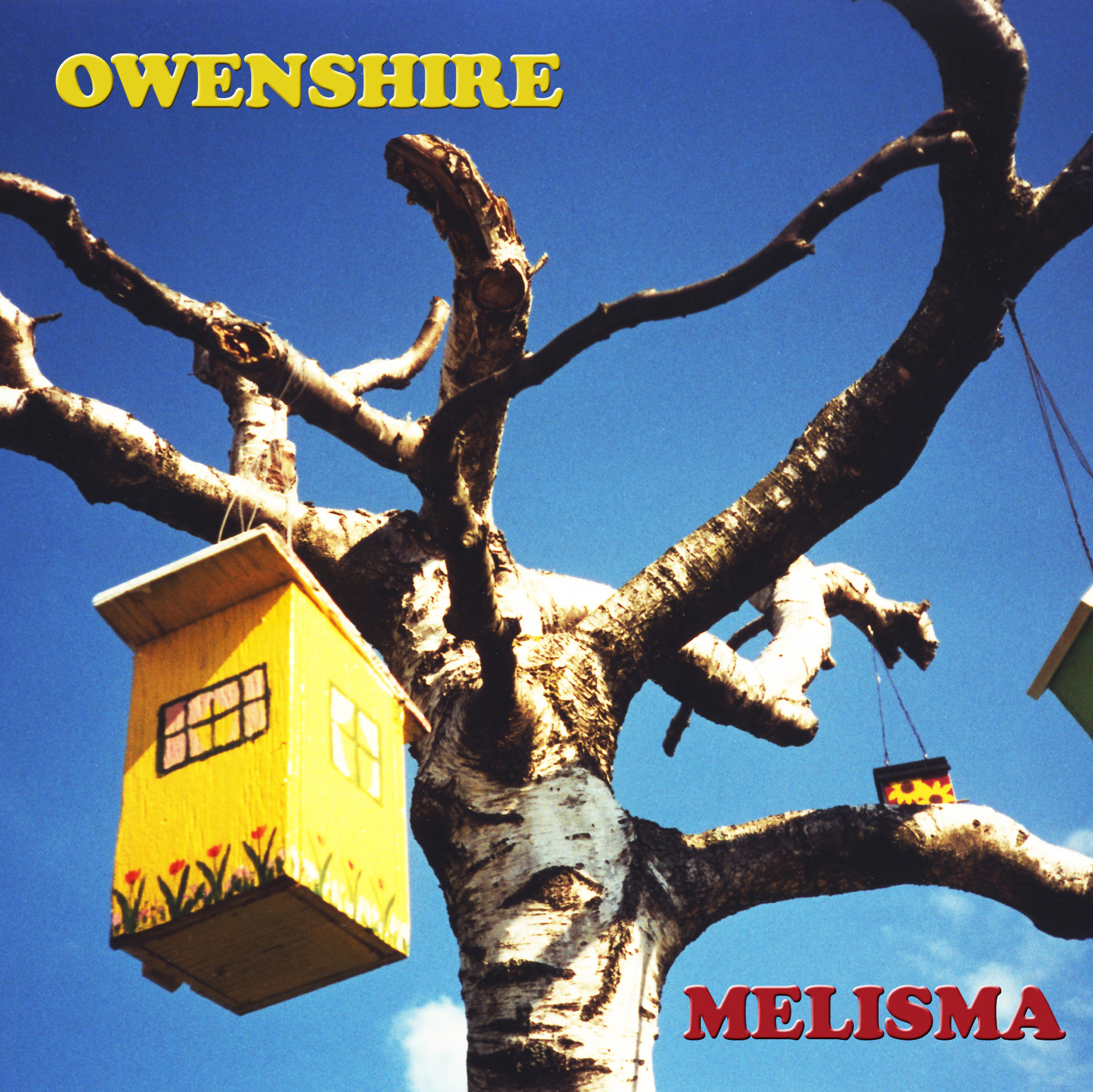 Summary: Album number five. Probably my favorite batch of Owenshire songs in mood, tone, and comradery before careers and geography effectively broke up the band and made me a solo artist again.  A culmination of seasons, unlimited potentials, and lost opportunities. All songs R. Muhlbock save for tracks 5, 10, 12 and 14 (G. Muhlbock). Entitled by R. and G. Muhlbock. Tracklist: I Have No Theme/ Matthew/ Comic Book Theme/ My Best Friend In The Whole Wide World Is A Shovel/ Lunatic Sunshine/ Party On Wheels/ What Cannot Be Recaptured/ Another Weekday/ Everybody Gets What They Deserve/ Sideshow/ Houseplant/ A Walk In The Park

Summary: Album 6[66]? A tongue in cheek title, but not really. A lot of death on this record, but the tragedies are probably too abstract for you to notice. All songs R. Muhlbock. Dedicated to Matthew and Tori. Tracklist: Difficult/ Plan Crash Nation/ Left To Be Like Me/ The Circus/ Never Two Quite The Same/ Tears of Rain/ Humid, Night, Air, and Rain/ Wine/ F (Version 2)/ Average/ Cheer Up/ I Once Had/ Tapwater

Summary: Another housecleaning record, comprised of long, lost Owenshire songs way before the first album—but ones that deserved a home nonetheless on this lucky and unlucky seventh record. Calling these songs rejects is much too mean. Underachievers, maybe? Anyway, view this batch of songs not in terms of song writing progression but more as a historical document. All songs R. Muhlbock. Deluxe edition would contain a bonus disc, to be sure, to make this collection 100% all the way. 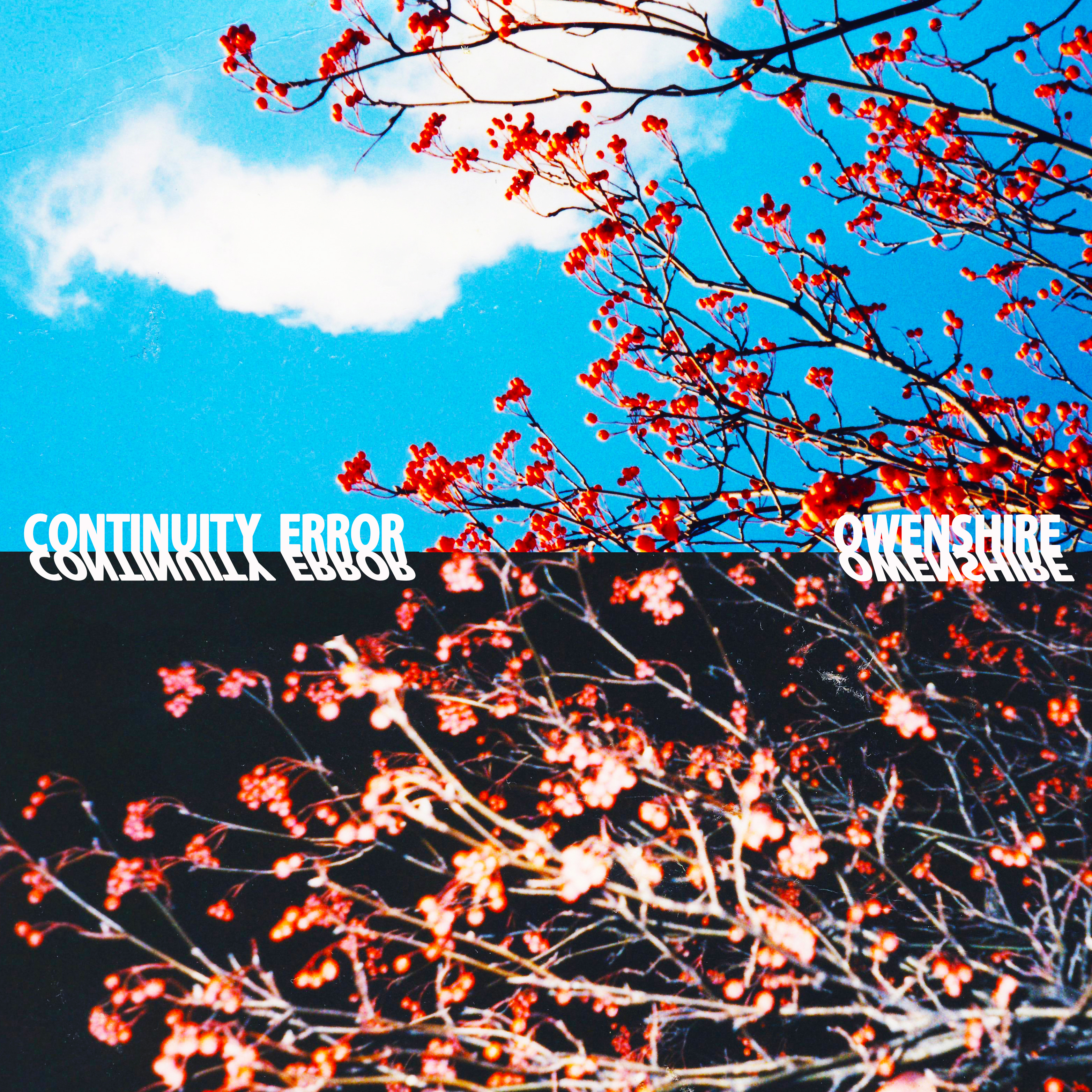 Summary: Album eight, and a bit of a homecoming in a way. Think arrival, full circle, and clouds breaking after a hardy storm at sea. That’s what this album means to me anyway, although you may not gather that sentiment from the songs alone. A companion record to Melisma.  All songs R. Muhlbock. 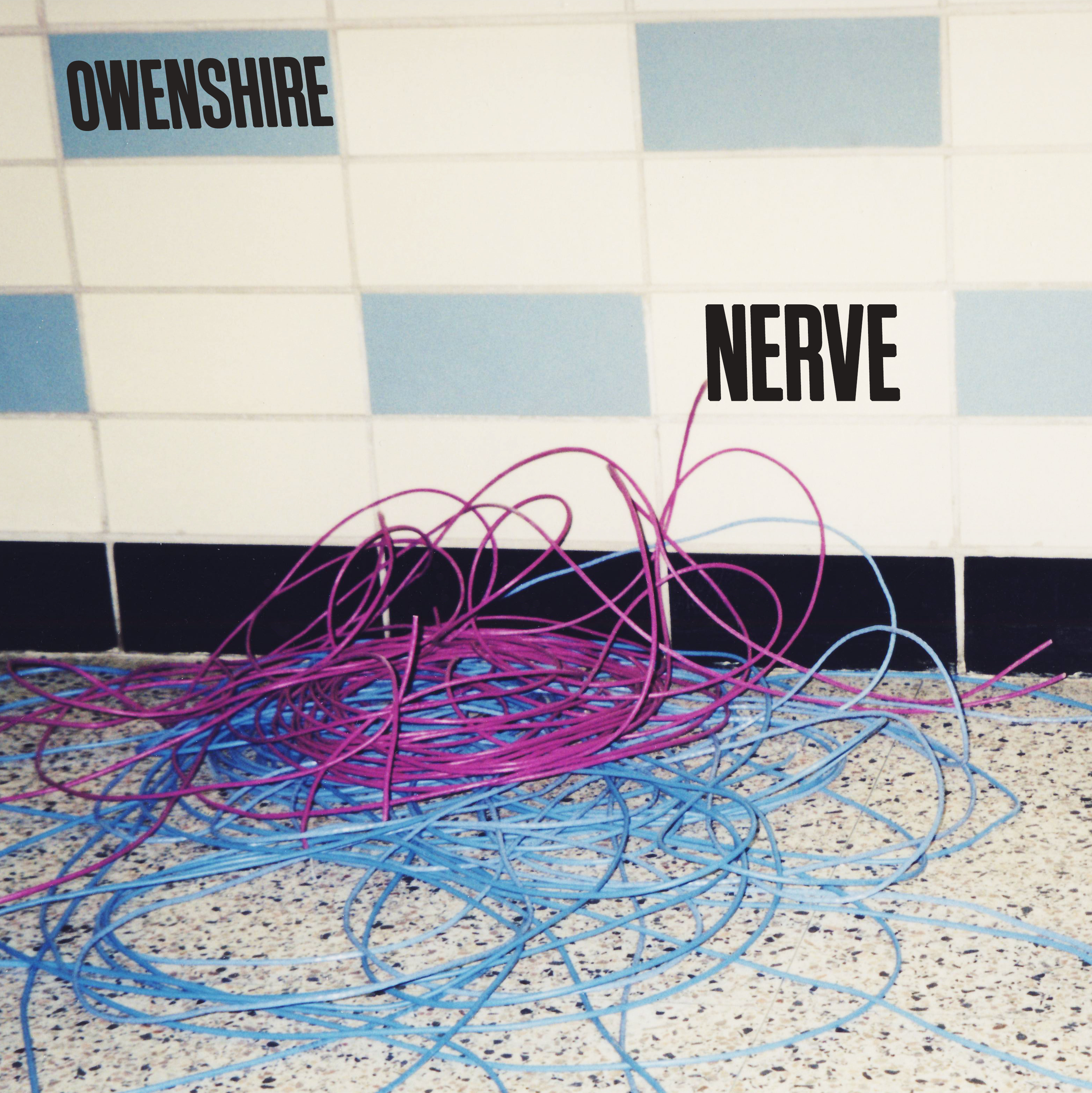 Summary: Owenshire’s “experimental” ninth album. Slow. Fast. Dark. Weird. Staccato. The oddball. The odd duck. The black sheep. All families have them. This is the album you reluctantly invite to Thanksgiving dinner and hope it doesn’t attend. But guess what? It does. And you’re all the richer for it. All songs R. Muhlbock. 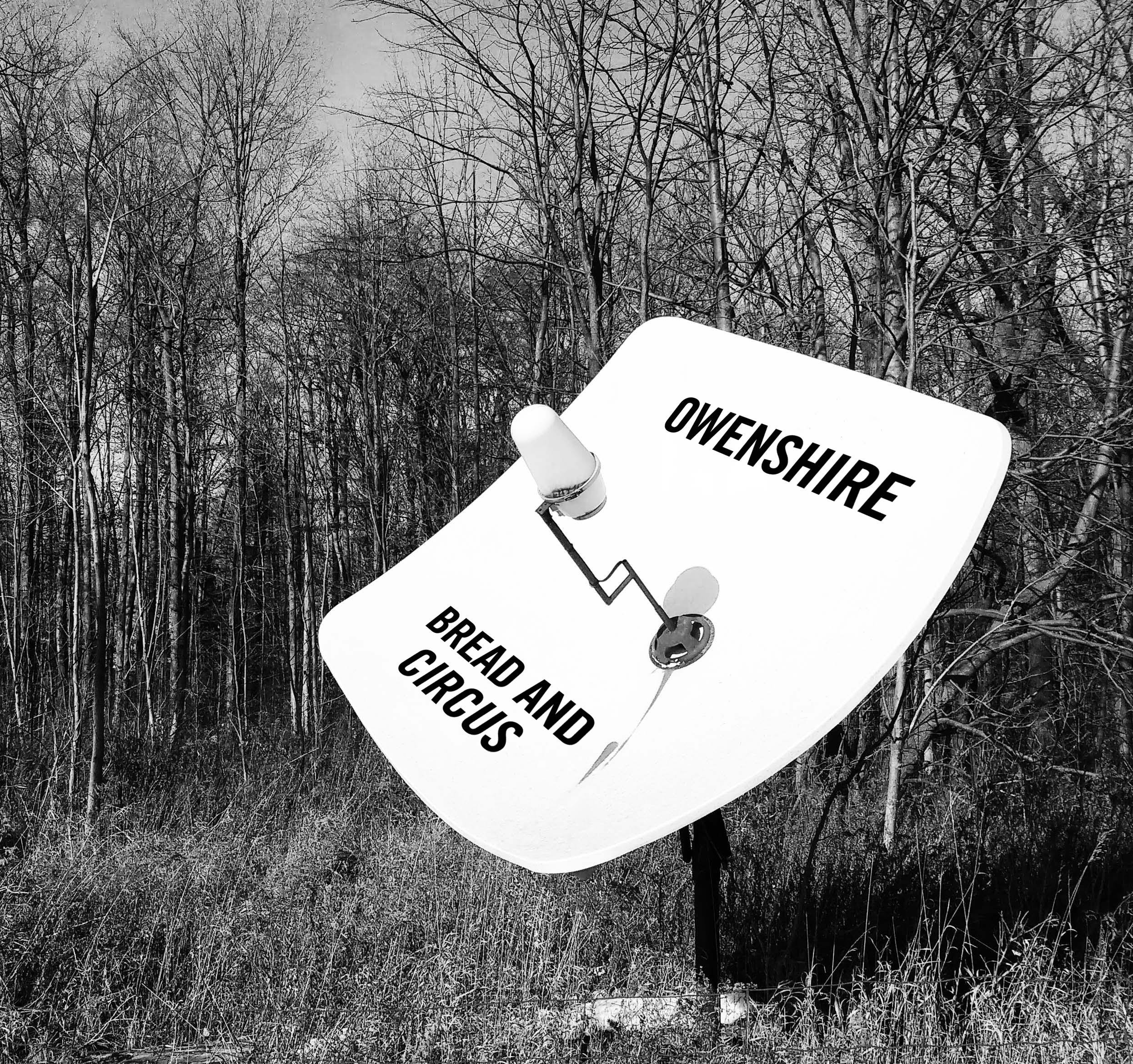 Tracklist: Avant-garde/ Book of the Dead/ Strangest. Day. Ever./ Arm’s Length/ Enemy/ Motorbike Theme/Bold Afternoon/ Everybody, Everybody/ Lighting Strikes Twice/ Reawaken/ We’re Always All We Have/ Me Company

Summary: The conclusion to a great imaginary career. Album ten. An album containing—yes—its fair share of bitterness, but also (rather uncharacteristically) themes of community and shared hope. A united sigh over the struggles contained within the human condition.  Or something. It even poetically ends with a song written in my teens. All songs R. Muhlbock. Historical Revisionism E.P. [2004, but not really]

Summary: A ‘created after the fact’ E.P. of a few extra tracks recorded during the sessions for the first two albums, along with some tracks I removed from What Is Your Contribution’s original album sequence. Then, add in a remix and a couple of alt versions for good measure. Revisionism indeed.  All songs R. Muhlbock 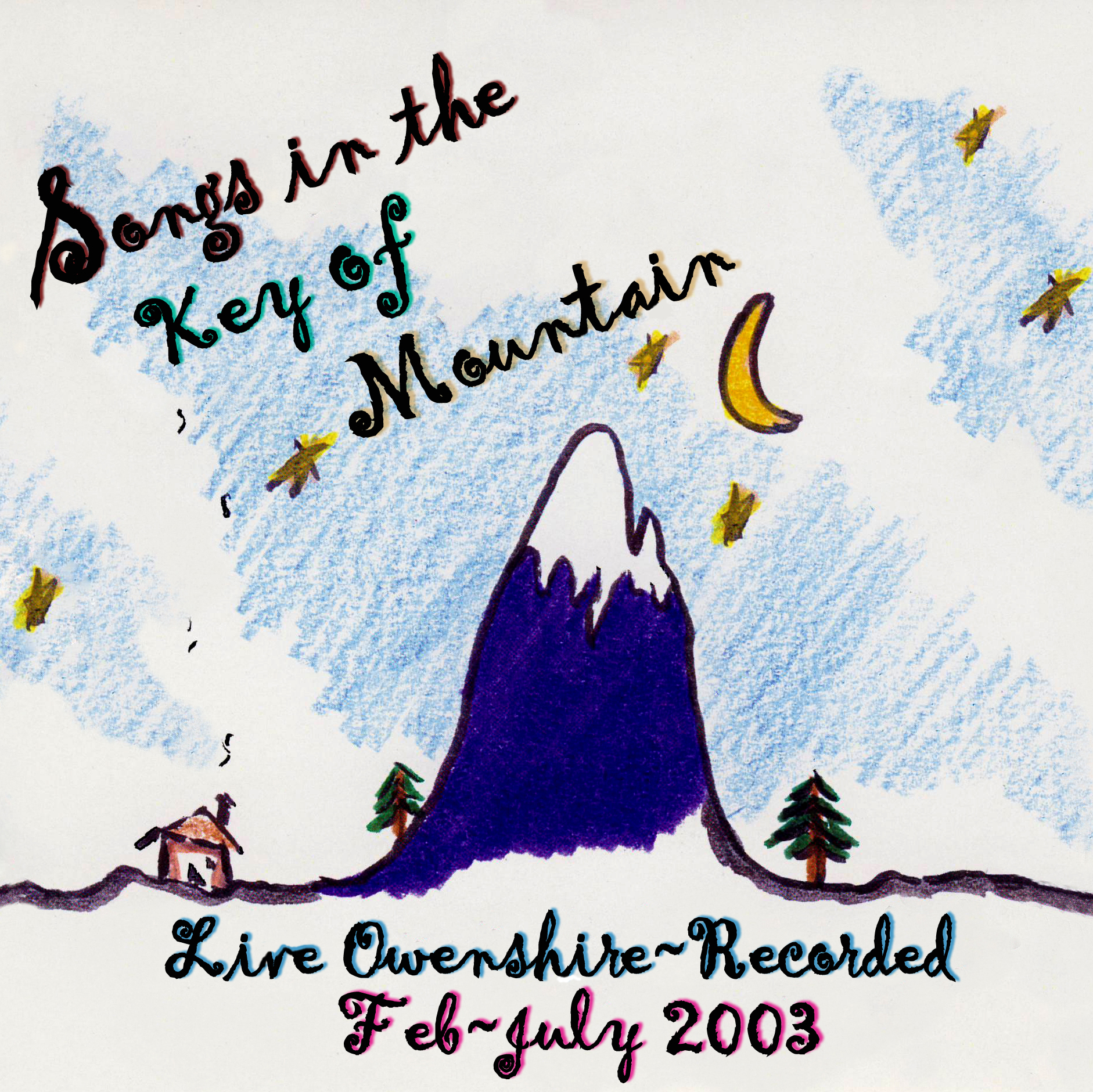 Summary: The ultimate ‘basement tapes’ fly-on-the-wall bootleg—literally. Recorded live various dates early 2003 in Rob’s basement at 75 Christopher Dr. Waterloo, ON, Canada on an old portable Hitachi boombox on various cassette tapes. As I wrote in the liner notes, this album captures “the banter, the sloppy solos…and the fun of three people undauntedly excited to be making music for no one but themselves.”  I drew something like 35 original sketches as companion art for this album, never to be repeated. 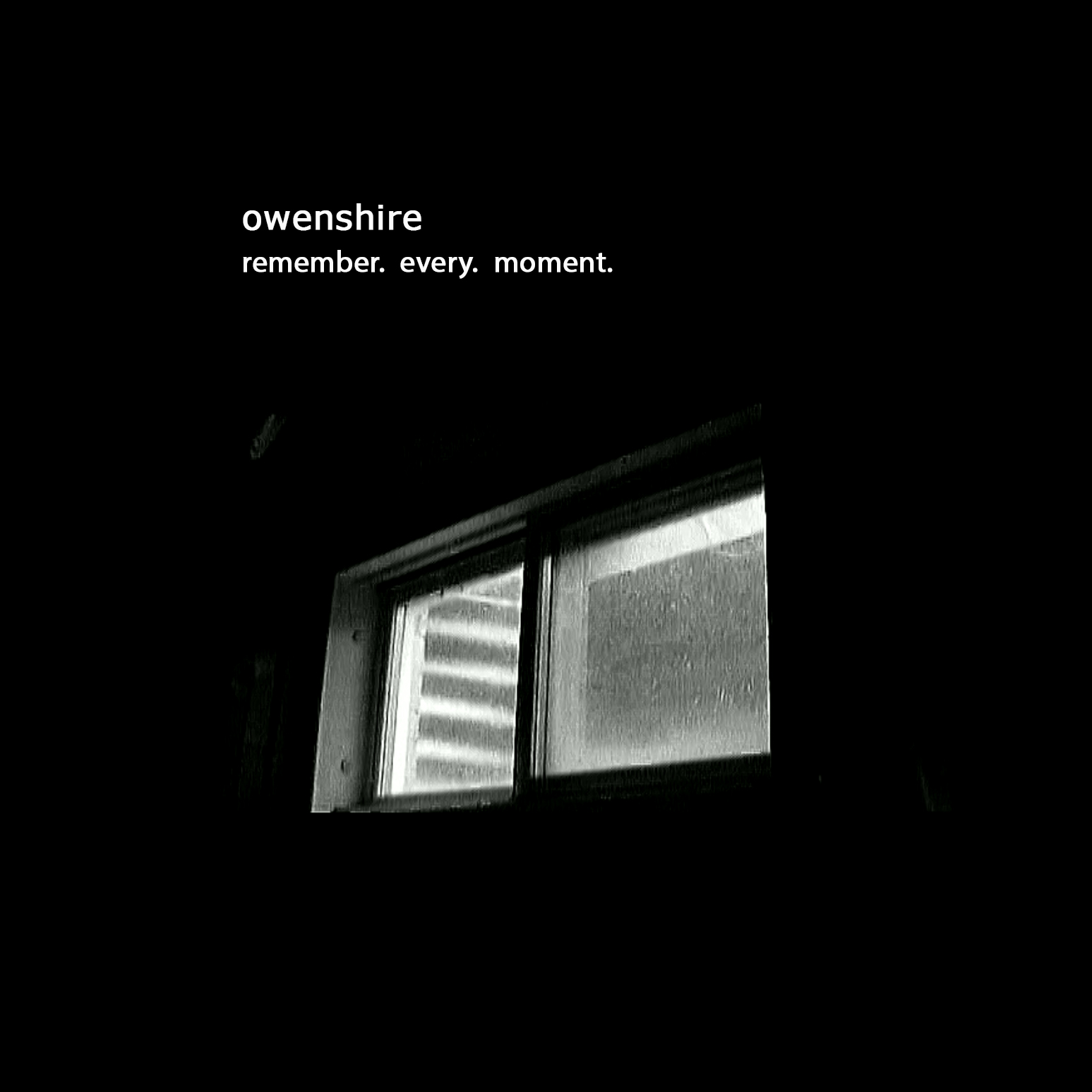 Tracklist: Stumble/Perfect Circle/ Old Man Kensey/ Ha (We Get Paid For It)/ Good Advices/ Carnival Of Sorts (Boxcars)/  Until The Day Is Done/ That Beat/ What If We Give It Away?/ The Wrong Child/ Mystery To Me/ Wendell Gee/ Electron Blue/ Pilgrimage/ Pretty Persuasion/ Electrolite/ It Happened Today/ Driver 8/ Letter Never Sent/ Try Not To Breathe

Summary: This R.E.M. tribute album began in 2011 as a firm 20 song set goal, then expanded to 40, and now has ballooned beyond all hope and recognition of its original intent. I also have no objectivity in picking what songs were better covered than others, so consider the tracklisting more of a selection than anything definitive. Anyway, this collaboration and pseudo-side project (until it became an all-consuming obsession and quasi-mental crutch) represents, at its purest form (stripped of all insecurity, guilt, and self-indulgence), the love two human beings hold for their favourite band: R.E.M., the best band in the world. All instrumental tracks by Clive Butler. This album is still a work in progress to which I will one day return. 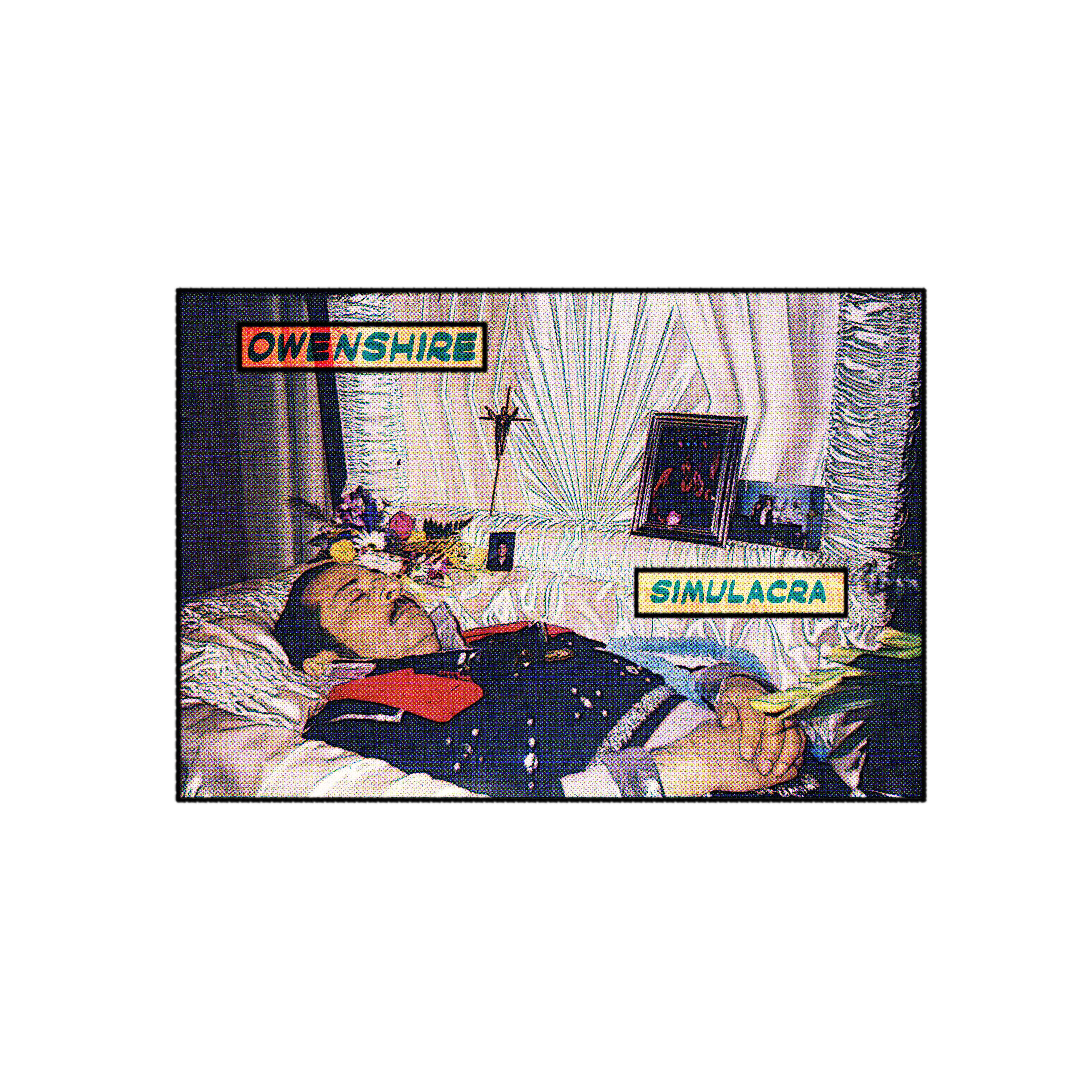 Summary: If I had the time, motivation, and means, I’d have already recorded the most eclectic and wonderful “covers” album celebrating all the obscure (and sometimes well-known) songs I’ve loved throughout my life. Sex Dwarf anyone?As it stands, this is yet another “when I get around to it” project. Dedicated to my Uncle Willy, an actual Elvis impersonator and performer–and the person in the casket adorning this album’s cover. I’ll tell you more about him, some day. 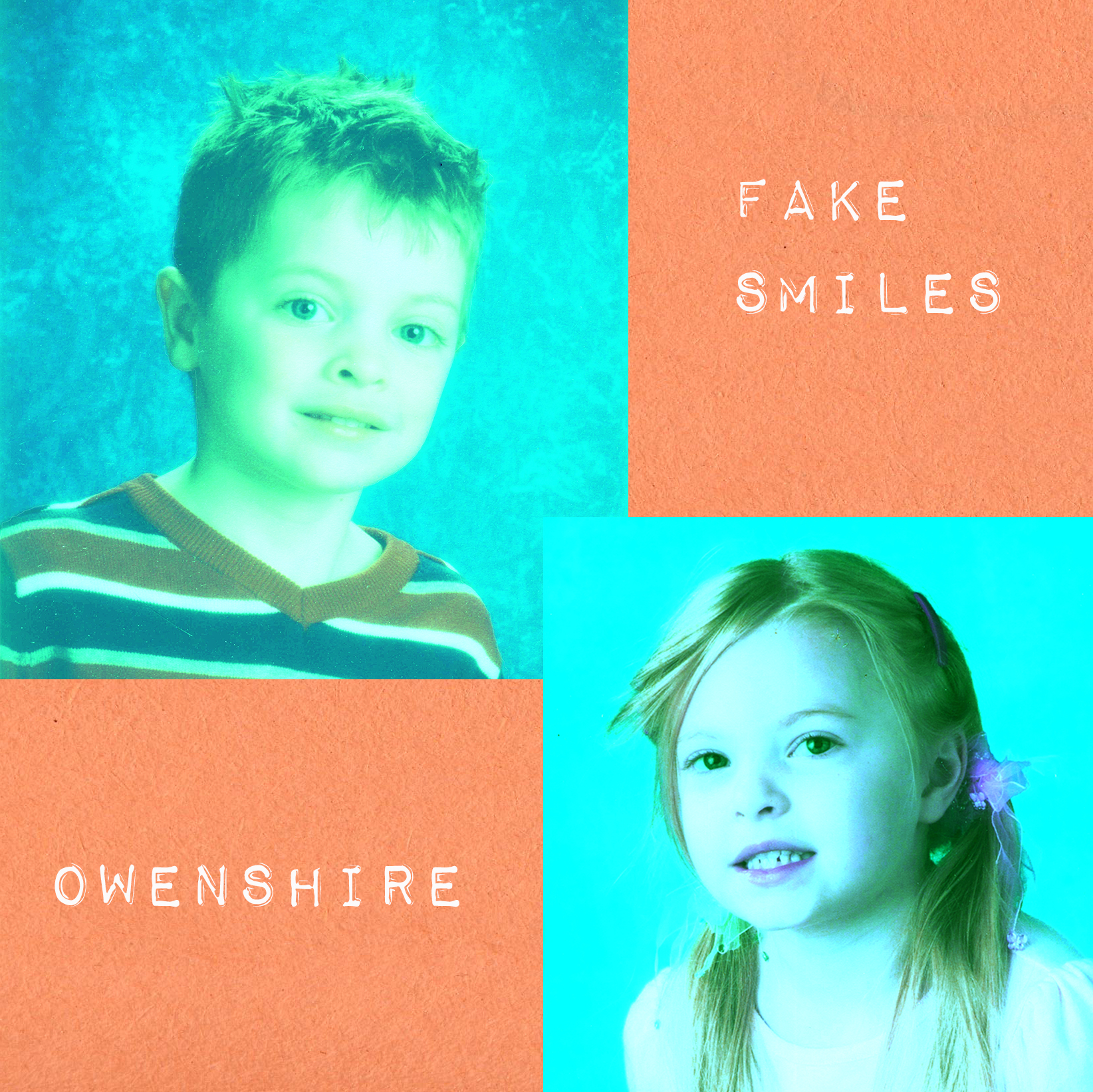 Summary: Every band needs one “long lost album” or one “final EP just before retirement,” and this is that owenshire recording. I have no idea what the tracklist will be. But there are riffs and there are vocal melodies, and those will comprise this one final recording. I promise.